Before leaving USA for good, I hit the vagabond road. I had left my work place and left my house-share in Royal Oak, Michigan, and was staying with my cool cousins in Chicago. I went to a Kmart,  bought a small portable, tent which could be wrapped the size of a large sausage, and embarked on a journey through the heartland of USA.

I took a Greyhound coach from Chicago going across the mid-west to the foot of the Rocky Mountains at Denver. Stopping at cafeterias in very small towns which doubled as Greyhound’s bus stations; passing through  the grainfields of America, towns like Cedar Rapids and Des Moines in Iowa, Omaha in Nebraska, Cheyenne in Wyoming, finally reaching Denver early morning.  Picked up a Ford Mustang at Budget car rental, and thus started a memorable adventure in the USA. 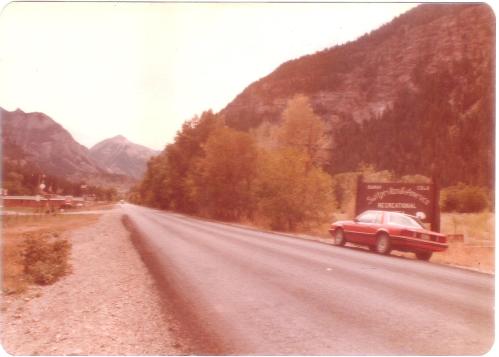 The road and the vehicle

At nght I would look for a camp ground, and pitch my tent and sleep in my sleeping bag. Early morning, undo the tent, wrap it up, have a shower, buy a milk packet and a snack from a vending machine and I would be off. 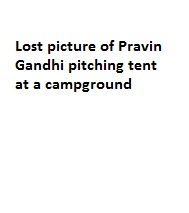 There were several canyons on this leg: Black Canyon, Gunnison, Box Canyon.

In the evening, I passed by Four Corners, the place where four states meet – Colorado, Utah, Arizona and New Mexico.

From 4 Corners I turned up north into Utah. and camped. Next day, drove through Utah. A very Orange dusty bowl with strange rock formations, among them the Natural Stone Bridges National Monuments; reminding me of Westerns and McKennas Gold; drove on the straight stretch of road seen in several movies and ads with the deep-red Utah landscape on both sides (stopped by a cop who said “Yeah its pretty isn’t it, but its better to stop at the side and admire the beauty”);  Geglen canyon and Lake Powell; the weird Bryce Canyon with bristle-like formations standing like sentinels.

It was getting dark, I had been driving all day. I ate at a Taco Bell and decided to push ahead. I drove on till I reached the hills overlooking Las Vegas at around 11 pm. I stopped to see the city lights from the hills.  I made a budget of $25 to spend in Vegas. So,I descended into Vegas  like

“The Assyrian came down, like a wolf upon the fold..”

only, with $25 budget I was no Assyrian nor a wolf. 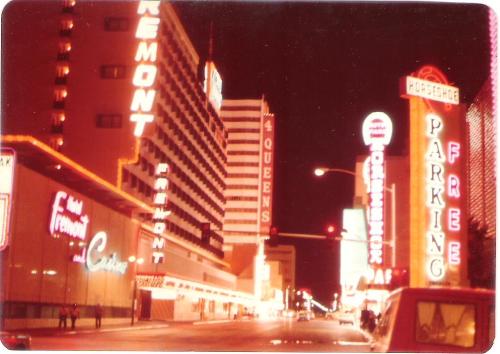 Vegas, Nevada: Vegas  was dazzling in those days too, but it didn’t have the Taj Mahal or the Eiffel towers. There were more shows and things happening indoors than external attractions. On my budget I lasted till 6 in the morning and I quietly left the city. I had not slept in 24 hours.

Once on the highway in Nevada, passing by the Hoover dam, I pulled up and slept in the car. Woke up to find my battery was drained: I had left the headlights on. I stood on the shoulder of the highway trying to flag the occasional car which would not stop. The landscape was barren and the sun was up. I felt like Cary Grant in the famous scene in North by North West. Eventually a police car came down and the cop gave my battery a jump.

Nevada was barren, dry. Tufts of bush. No signs of civilisation. Turned into the first village for some food. Turned out to be a Red Indian ghost town straight out of a western movie. Stepped into a diner and ordered a grilled cheese sandwich. Smelly toilet. Rough people, Scary. Probably they too were staring at me:  it is not often that a skinny, short, brown person drove into their village for a sandwich. I grabbed my sandwich, paid, and made a hasty exit. 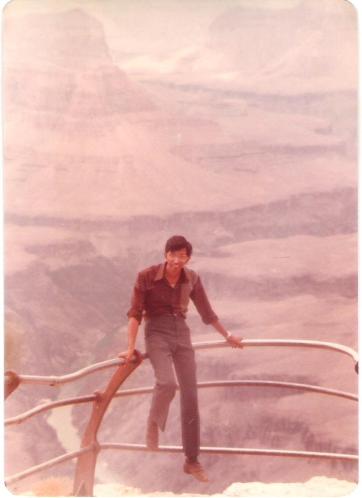 At the Grand Canyon

Grand Canyon: That afternoon, I turned into the Grand Canyon. Saw a few points including Point Vishnu, got a pic of myself perched so dangerously that I would spank my kid if he/she did that. Left in a few hours, passed 4 Corners again and camped somewhere.

Back in Colorado: Next night, picked up a blanket at Boulder, Colorado. Too tired to go to another campground. Slept in the car on the road in the middle of nowhere somewhere in vicinity of Denver.

Next day, I trekled up a trail in the Rocky Mountain National Park.

Almost mugged: Back in Denver, parked the Mustang outside the Greyhound bus station and passed the night inside. Wanted to put my camerabag in the locker but the only available ones were outside the etrance. Two guys accosted me and asked me for a quarter. I gave away one of the two that I had for the locker and now I was short. Seeing me fumbling, they asked me “What’ve you got?” Then one of them saw me trying to hide my camera, and he says, “Look, cuz, he’s loaded!” I ducked expertly under his arm reaching for my shoulder, and sprang like a gazelle into the safety of the premises. I slept on a chair in the station clinging to my camera bag.

Back to the Greyhound coach

I returned the Ford Mustang in the morning and boarded the bus to Yellowstone National Park. I had to change over at Salt Lake City in the middle of the night where I had interesting chat with an Indian prof. After spending a few hours at the Yellowstone, seeing Ol’ faithful geyser spout a couple of times (it spouts every 55 minutes), I got into a Greyhound to go to Billings, Idaho, thence to Mount Rushmore, South Dakota, where the faces of 4 US presidents are carved into the granite face of the mountain. At Billings, I decided to give it a miss. Had had enough, I was tired, hungry, sleepy. America is not a country to travel on a shoestring, without a vehicle, without a Europe-on-$20-a-day -like book companion.

Changed over at Minneapolis, called up an acquaintance from India who lived there, at 5 am to say Hi, just passing through, thought about you! Wonder what choice swear words he would have used. Stayed over at Madison, Wisconsin, where I had studied for a semester, where I had some friends and fond memories of good as well as hard times. Emotional farewell to a beautiful university town.

Next evening I was back with my cousins in Chicago.

I had slept for 3 nights in a tent at a roadside campground, one in the Ford Mustang, a couple at Greyhound bus stations, and the rest in the coach itself.

“Ventura Highway, in the sunshine…
You’re gonna go,  I know…
For the free wind is blowin through your hair…”

← Weekly Photo Challenge: Curves | Pregnant with Gossip
“One at a Time” and the tradition of short-story-telling →