His name was Nano. Wouldn’t be a year over 20. We had been given him and his SUV at Bomdila in India’s Arunachal Pradesh state which borders with Tibet (China). Fair, medium build, a gelled strand of hair dropping carelessly on his forehead.   Not very communicative, Nano mostly kept to himself, playing 15-odd Bollywood songs repeatedly at such volume that conversation was difficult. Over two days, we would learn a lot of his character and abilities, and encounter a fair amount of adventure. 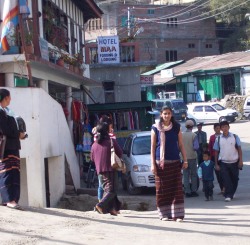 We reached Tawang  in one piece despite the bad road upto Sela Pass (4100m, 13,500 ft), probably the worst mountain roads that I have travelled on.

Next day, we couldn’t go to Bhoomla Pass, a border post on the India-China border at 4600m (15000 feet), as a flag meeting between the Brigadier of the Indian Army with his Chinese counterpart was being held there. Nano drove us to Shingetseri Lake somewhere thereabout, now called Madhuri Lake, after a song sequence starring Madhuri Dixit and Shah Rukh Khan in the film Koyla. The road from Tawang is dry and strewn with rocks, bereft of even a blade of grass.

Back in Tawang, we visited the Tawang Monastery, the largest Buddhist monastery in India, and the 1962 war memorial, where we wept at the massacre of badly equipped 4000 Indian soldiers in an unequal battle with the Chinese. We got our permit for Bhoomla Pass from the Army late afternoon, and went back to the hotel, when Nano said “I am not going up there again tomorrow, we’re going to go back to Bomdila”.

A kick and a slap

Night falls early in Tawang, and residents scurry into their homes at fall of dark. The only people on the street were Nano, other SUV drivers who transport men and material, my brother and I. We were still reasoning with Nano who, with support from friends of his profession, was adamant. A police Gypsy came up, carrying two officers and a constable. “Tourists?” asked one of the officers from the window. I nodded. “These guys giving you trouble?”  “Well”, said my brother, “we want to go to the Bhoomla Pass and we’ve obtained a permit, but our driver is not willing”. At a sign from the officer, the constable got out, gave a kick and a resounding slap to Nano, and told us that he wouldn’t trouble us.

Next morning, we were back on the same road that we had taken the previous day, with a sullen Nano at the wheels, and turned at a fork for Bhoomla pass. This is where the Chinese had launched wave after wave of men and material in 1962 and overran all resistance at the Indian border post and their juggernaut had rolled on down to Tawang, past Sela Pass, as far down to Bomdila. At 15,500 feet, we mingled with the soldiers and were given tea in the Reception centre where there had been a flag meeting the previous day. We returned to Tawang, and continued on our journey to Bomdila, after a spot of lunch. We had lost half a day , and we were concerned that we had started very late.

An hour after we left Tawang, the accelerator cord broke. There was no help for 20 kilometres either up or down the road. Here’s where  Nano showed his ingenuity. He replaced the cord with a string which he pulled with his right hand instead of using the gas pedal, while shifting gears and shifting gears with the other hand, till we reached a village where he could get a new accelerator cord.

It was dark when we reached Sela Pass. We would have to take the terrible road down the pass in absolute darkness.   There was very little diesel

in the vehicle. At the top of the pass, Nano stopped at a lonely hut where 4 men were gambling. Ignoring them, he walked into the house and negotiated with the woman and bought some diesel. And we were on our way again.

One of the most memorable drive of our lives

View from Sela Pass. That’s the way we go down on our way back

The entire valley below the Sela Pass was filled with clouds which shone under a full moon. Silver clouds stretched below us as far as the eye could see. It was as if we were flying over clouds and watching a very large moon shining on them – a serene feeling alternately marred by the loud thud of the vehicle’s suspension every time it fell into a pot on the road. Meanwhile, a lonely vehicle carrying 6 silent individuals who were lulled, and scared, desperately tried to keep going and reach the finish line.

Just as we had descended the pass and entered the town of Dirang, the rear suspension gave way with a crack and the vehicle sank on the road like a horse which has given up. We found a hotel. We shuddered to think of the adventure we would have had to endure if the vehicle had broken down much before the town, or worse, on the Sela pass.

That was the last we saw of Nano. He didn’t turn up at our lodging in the morning and we were upset that we had to make alternate arrangements to go to Bomdila. We can never forget our two days with this interesting kid, who had a mind of his own, yet was ingenious and resourceful. He had taken us to one of India’s farthest frontier and brought us back to civilisation safely. After all, he took a kick and a slap gamely for us.

Going to To Shingetseri Lake. The other side of the mountain range is China

At the Tawang Monastery at Tawang 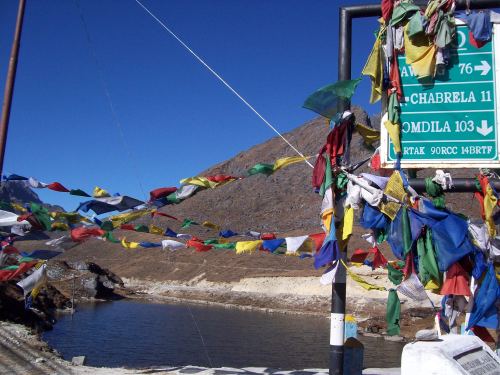 At top of Sela Pass, and onwards

2 thoughts on “Pravin Gandhi’s people and places: Tawang, and Nano”